An excerpt from The Last Beekeeper

The pair were perched precariously on top of the cock of hay.

It was their crow’s nest to the world. From here they earwigged on the grown ups miles down on the ground below.

One false move, sneeze, laugh or cough and they would be rumbled, or worse again tumble from up in the clouds to the earth below. With a finger pressed against pursed lips and a wide-eyed stare was the warning to stay still, not a stir or they could be in trouble, big trouble.

This was serious stuff.

Grandpa didn’t say a word. Just kept nodding. Nodding. Up and down, side to side. In agreement. In disappointment. In disbelief. He was talking to Murphy, the undertaker.

When the adults had departed and sufficient time had passed for them to be gone a safe distance out of sight, the two held hands and slid down the side of the haystack. Back down to earth.

“So, what were they saying”?

“For what? We did nothing, no one even knows we were there.”

“Not that silly, I mean big, big trouble. That was Mr Murphy, the undertaker.”

“Undertaker? Is he a wrestler? Like his all-black outfit, shiny shoes and leather gloves. Can we get his autograph?”

That wide eyed look again was enough to put a halt to this line of enquiry.

“It’s not a curse if you’re praying. I was saying a little prayer to the Baby Jesus.”

“Anyways, what trouble so big it brings you out in prayer and it’s not even a holy day?”

“Well, how bad? Don’t have me to start praying to squeeze it out of you. I couldn’t hear a single word or see a thing pinned down behind you on that mountain of hay.”

“We must do something, about it, we can’t just hang around waiting for it to happen.”

“Wait for what to happen, sure what can we do? It’s starting to get dark sure and if we don’t get home soon Granny will kill us stone dead and have our sacred lives.”

“You do know that’s just an expression? She wouldn’t really kill us.”

“No, she seemed fairly serious the last time, when we eat the bread-and-butter pudding, she left cooling on the windowsill.”

“That was different. Anyway, we can’t spend what’s left of our summer holidays fooling around the fields and fishing for pinkeens with jam jars. We have bigger fish to fry.”

“It’s an expression. It means we’ve got a mission.”

“I know it’s an expression, and I know what it means, but what mission?”

“You heard the man.”

“What man? I heard nothing, you were sitting on my head, squashing my ears into that hay.”

“But we’re back to school on Monday.”

‘Don’t be so negative. I know that. It’s only Thursday. We have all weekend, but not a moment to spare or a minute to waste. We’ll grab our stuff and sneak out tomorrow night when Grandpa is at the match and Granny is at the bingo. They won’t even know we’re gone, and we’ll be back on Sunday before they miss us, in time for school and we’ll have some story to tell first day back in September…how we found the last beekeeper and saved the world. Can you imagine? Everyone will be delighted, even Miss O’ Donnell. She might even leave us off our homework. We might even get a day off. Can you believe it? Day off, first day back and all we have to do is find the last beekeeper.”

“Where are those kids? It’s too dangerous for them to be out at this hour.”

“Don’t worry, they’re on their way. They’re down the road behind me. They’ll be in the door right after me.”

“Sure, weren’t they hiding up on the cock of hay as usual since cock crow with their ears cocked, giggling and tittering, trying to overhear myself and Jack Murphy.”

“The Undertaker, what did he want?”

“Nothing much, he was just lookin’ to arrange some beekeeping classes down below in the hall for the dark evenings. He was trying to rope me in for the ten weeks course with Paddy Mac, because he’s the last beekeeper in the parish and they’re anxious not to let the knowledge and skill slip away. Paddy’s getting on ye know.”

“He’s the same age as you. Weren’t ye both kept back in 5th class sure when neither of ye could do your sums.”

“Anyway, I signed up. He wasn’t pushy. Said it wasn’t the end of the world if I couldn’t. But sure you’d want something to occupy your head on them dark evenings after that summer, the worst in living memory, according to Jack. I never saw as much rain in all my life and it’s only the first of September on Monday.”

“There they are now. Where were ye two? Look at the state of ye. Get in there and wash yer hands before your supper, I haven’t laid eyes on you all day. You must be famished.”

Inspired by the spirit of The Rainbow People, ‘The Last Beekeeper’ is now available at selected bookshops and outlets nationwide.

It is written under my pseudonym, 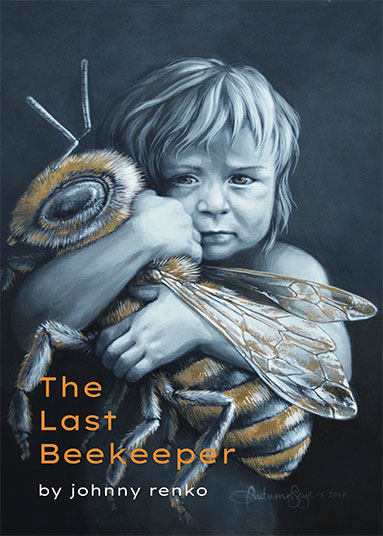